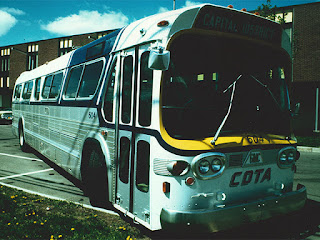 The first thing I did was to make it over to the Albany bus depot three blocks away. There I used a payphone to call my friend Kerry. Thank God, it was early enough in the morning that she was still at home and she picked up on the first ring. After hearing my story she said, “I’m not sure you can stay at my house, but we can ask around.”
"I walked another three blocks over to the corner Washington Avenue and Lark Street to catch the bus to Stuyvesant Plaza. I was feeling like a wanted fugitive, so I stood a little way back from the street and kept my head down. I was hyper-aware that at any moment someone from the shelter could come driving past and make me get into the car or worse, they might have called the police, and I could be forced to get into the back of a police car. It took about twenty five minutes for the bus to come, and I climbed aboard with my head down.
Kerry was waiting for me by the time the bus pulled in. I ran over, climbed in her car and we drove to school. “Tell me again what happened for you to run away from the shelter?” she asked, pulling out onto the highway.
I went through the story again and Kerry inserted various “wows” when I reached the parts about smoking weed, getting caught with it, and then being told I would have to leave. “What do you think that you’re going to do now?” she asked. “I don’t know,” I said. “I am going to ask several friends at school if I can stay with them.” I didn’t have a lot of time to find a place to spend the night. I knew that it was a lot to ask of someone, but to then ask them to let me live full time with them? Even I knew that was almost too much to ask.
Kerry pulled into the school parking lot at Guilderland High and looked directly at me. “Are you okay?” she asked. I nodded and fought back the tears. “It will work out,” she said. “I know,” I responded, opening the car door. Pausing, I asked, “Can I leave my bag in your car?” “Of course,” she said, and we headed into the school.
I ran to homeroom before the bell and checked in. Our homerooms were organized by last name, so everyone in my homeroom’s last name started with the letter D. Thank God that one of my best friends Debbie was there. I needed the laughs and the support. Debbie was one of the funniest human beings I have ever had the pleasure to get to know. We had started a school newspaper together once — well, more like a flier — that had a great exposé on various cheerleaders in our homeroom. I quickly went into homeroom, and when I didn’t find her there, I knew right where to go.
Like every high school, the students at my school were all ganged up in familiar groups. Separated into various categories were the jocks and cheerleaders, nerds, potheads, and theatre people. I was part of the theatre people group. The theatre group also lumped together all the people in the band. If you played in the band, you were also allowed to hang out in the band room before school started, after you had checked into your homeroom. Being that I was in theatre but not in band, I was tolerated, but I was still breaking all the rules by going there for homeroom. Today, this point seemed a moot one.
I didn’t have a plan, but I figured that I would just start asking for help. On my first attempt, my friend Beth said that she would ask her Mom if I could spend the night. Beth and her mother lived alone and they had plenty of room, so she didn’t think it would be a problem. Twenty minutes later Beth had cleared it with her mom, and I was to go home with her at the end of the day.
I was so relieved that I had a place to spend the night, but I still needed to ask around to find other places to stay. I was sure that Beth’s mom was not going to make this a permanent thing.
at May 24, 2021