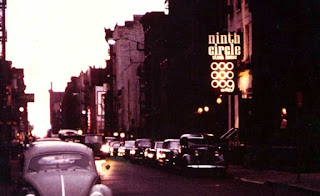 I hurry down the stairs hoping that there are still some customers  left in the bar for me to wait on. I have spent way too much time with Bobby and I’m not making any money to pay my bills. The party in the bathroom has broken up and the door has been left wide open.

Almost running down the stairs, I pray that the buzzer summoning me back upstairs won’t ring for the rest of the night. I reach the bottom of the landing, and see that Stinky is with another date. This one looks like he has passed out. Stinky is rifling through the old man’s coat pockets. He flashes a smile as I pass by. “Don’t judge,” he says, batting his eyes. “A girl’s got to make a living.”

Grabbing the knob, I open the door to the club and find that the place is packed. The lighting has been turned down and the place is now illuminated by the lights on juke box and various low-wattage lamps on the bar. Don lifts his head while making a drink and motions me over. “Our homeless boy has fallen asleep at the table. Go throw him out,” he says, grimacing. “Where’s Brian?” I ask. Don motions with his head to the pinball machine. Brian is in full ecstasy while he works the flippers and gently humps the game. “I’m on it,” I tell Don.

Walking over to the table I see the homeless guy has only nodded off again, but gives the appearance that he is sleeping. In fact, he is in a full heroin nod. Using a tray, I nudge him and he sways a little with the nudge but is still out cold. I nudge him again and this time his eyes open to half mast. “Time to go, my friend,” I scream in his face. He smiles and nods out again. I repeat the tray nudge and his eyes flap open. He smiles, stands and teeters back and forth. He gains a little speed and tumbles through the crowd. It is like watching a drugged-up Moses parting the Red Sea. The crowd literally jumps to get out of his way.

The patron at the next table signals me to get my attention. “He forgot his bag,” he says to me, pointing to the floor under the table. I quickly go to follow him but then think twice because he has nodded off in the doorway. I will get his bag and bring it to him.

Now I have a new problem. I don’t want to touch his bag, so I go back to the bar and ask Don for the broom. As I am walking back to the table, Mitch comes up beside me. “What are you doing?” he asks. “Getting a bag that belongs to the homeless heroin addict nodding off at the front door.” It strikes me funny and I laugh. Never did I ever think I would use any of those words in a sentence to describe what I was doing during a day in my life.

Holding onto the bristles, I push the broom handle through a loop on the bag. It is rather heavy when I hoist it into the air. “Gross,” says Mitch, taking a step back. No sooner do the words get out of Mitch’s mouth than the bag breaks and scatters the contents to the floor. Mitch and I jump into the air when bottles of Jergens lotion crash to the floor, spraying everywhere. Mitch makes vomit sounds and steps back.

“Good Christ!” I scream out. I look at Don who is laughing his ass off while he watches this. “Can this night get any worse?” I scream as I drop the broom and head back to the bar. “Goddamned junkies,” I scream. I look over at the door while Don hands me some bar rags. I see that the junkie is gone; in his place stands Bob, his eyes scanning the club. When he sees me he flashes the biggest smile that not only lights up his eyes, but also lights up my heart.

“Excuse me,” I say to Don, dropping the rags on the bar. I push my way through the club to get to Bob. I deserve a little happiness — especially tonight — I think to myself. Bob is pushing his way through the crowd to get to me. The jukebox is quietly playing a Lou Reed tune. We meet halfway when Bob throws his arms around me and plants one of the most passionate kisses on me that I have ever gotten. I pause, come up for air and look into his eyes. Then I hear someone screaming, “Geoff, you fucking asshole, you’re the one dating my boyfriend?”

I look in the direction of the screaming just in time to see John standing on his bar stool, tears streaming down his face. I see him raise his arm and cock it back. The next thing I know, I get hit in the chest by a glass. Everything happens so fast. First the glass explodes on my chest and then the bar erupts into chaos. Brian, who was at the pinball machine, literally comes flying through the air out of nowhere and tackles John. Then I can see Brian repeatedly punching John in the face. John’s bloody and bruised face keeps popping up, then disappearing. Brian hits him and he crumples to the floor, so Brian picks him up off the floor and punches him again and again, repeating this until John is becoming pulp.

Bob checks to see if I’m all right, and pushes me to the side as Brian drags John past us. His bloody face is so messed up that he is now just gurgling and spit hangs from his lip. Violently dragging John down the front steps, Brian walks across the street and throws him on the ground. Rule number one is to never beat someone up and leave them in front of your club.

I push through the chaos, dragging Bob with me. I stumble down the front steps. Brian walks past me and says, “Nice job, asshole.” Across the street John is screaming, “Why?” over and over again. It is one of the most guttural cries I will ever hear in my life. I run across the street and kneel next to John who just continues to scream, “Why?”